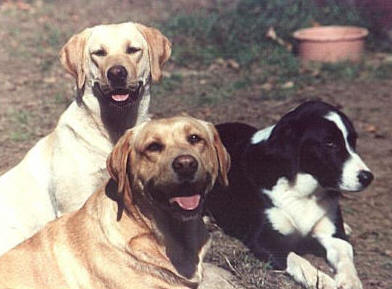 Buck was rescued at 4 months old.  When I adopted him, I became his fourth owner. (Technically, he was Strider’s dog, but that is another story.)  His mom was a pet Labrador and his dad was some type of Husky. Buck likely had some Border Collie in his pedigree as well. He was born some time around St. Patrick’s Day in 1988.

Buck was the protector of his Labrador pack.  No one approached the kennel without Buck’s approval.  When Buck died, we purchased a German Shepherd to continue his important job. Her name is Brownhill Aragorn’s Proxy for Buck.